Reflecting the heart of God in my sermon In a world of great authors, public speakers and preachers there is always pressure on a pastor or a bible teacher to up his game and to deliver standout sermons. Whenever we approach that time of sermon preparation there is that temptation to want to find some amazing new revelation from scripture that will just be a mind- blowing moment for our congregations. There’s always this temptation to expect some spectacular nuggets from the Lord as we seek him for a message for the people.

Sometimes we feel jealous of some of those Old Testament prophets who had these spectacular visions of God or from God. My mind goes back to Daniel’s visions of the beasts or to Ezekiel’s vision of the valley of dry bones that came to life. I seek God for something spectacular that would captivate my mind.

But as I study the scripture I find that God very often is amazingly and wonderfully happy to use the simple things of life to drive home some deep and profound message to His people. In my daily quiet time I happened to be in Jeremiah 24, a passage that centers on a vision that Jeremiah receives from the Lord. The simplicity of the imagery floored me. There were no beasts, dragons, statues, angels – nothing spectacular. All Jeremiah saw was two baskets full of figs. One had good figs and the other had bad figs. The message God gives him is one of profound comfort and yet scary wrath. The message he got to speak to the people would have been a relevant and powerful one. But the vision in itself was so wonderfully simple. 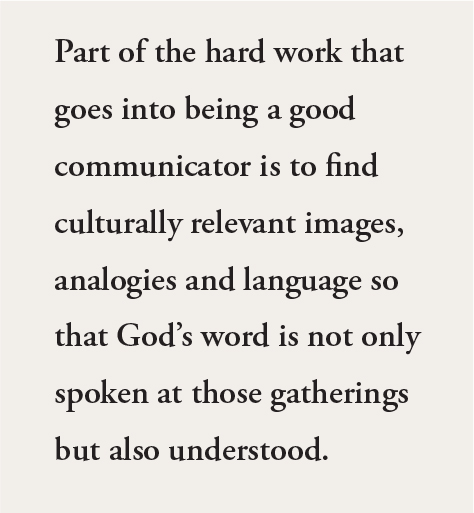 It reminded me of Jesus in the New Testament. With all the wisdom that only God can have and with all the knowledge that only God can have, the simplicity of Jesus’ imagery is staggering. Sometimes it was a father-son story and other times it was a master with his servants. Sometimes it was an image of a fig tree and at other times the imagery of a sheep or a shepherd. Jesus, in His teaching reflected the Father’s heart to be understood rather than to look good while communicating. He is not concerned with having his audience awe-struck by His wisdom. We know He had the ability because at the young age of twelve he had already wowed the teachers of the law in the temple. Similarly we know, from many instances in the Old Testament, that the Father can give His prophets visions with staggering imagery that will leave one breathless at their scope and that would not be adequately communicated even if the most fantastic of Hollywood producers were to make them into movies. And yet we find him oftentimes using simple and easy to grasp imagery to communicate His message to His people.

It raises a great introspective question for me as a Bible teacher and communicator. We bible teachers rely on imagery and analogies in our sermons as well. We use these as tools to communicate God’s truth to God’s people seated before us. But am I reflecting the Father’s character in the way in which I word my sermons and pick my language, imagery and analogies? I find many times preachers love to overuse the line “in the original text it says…” and they do so not so much to educate their people but to seem educated in front of their people. I find times when the sermon analogies, wordings or imagery used are so far removed from any kind of relevance to the congregation sitting in front of them. Do not hear me wrong. I am in no way talking about diluting a message based on an audience. I am merely talking about our choice of imagery, analogy and language used to communicate the theological truth God has given us to preach. Part of the hard work that goes into being a good communicator is to find culturally relevant images, analogies and language so that God’s word is not only spoken at those gatherings but also understood. We need to check whether our time at the pulpit leaves our congregation gawking at our wisdom or actually helps them grow in their own wisdom.

It is a fine balance, an oratory tightrope that we have to walk. But we have the amazing examples of The Father and the Son before us. We also have the gift of the Spirit within us. It is a great privilege to teach God’s truth to His people but let’s also push ourselves to reflect His character and desire to be understood in the way in which we speak as well.

Wonderful. Jesus spoke in parables so that common folk could understand….